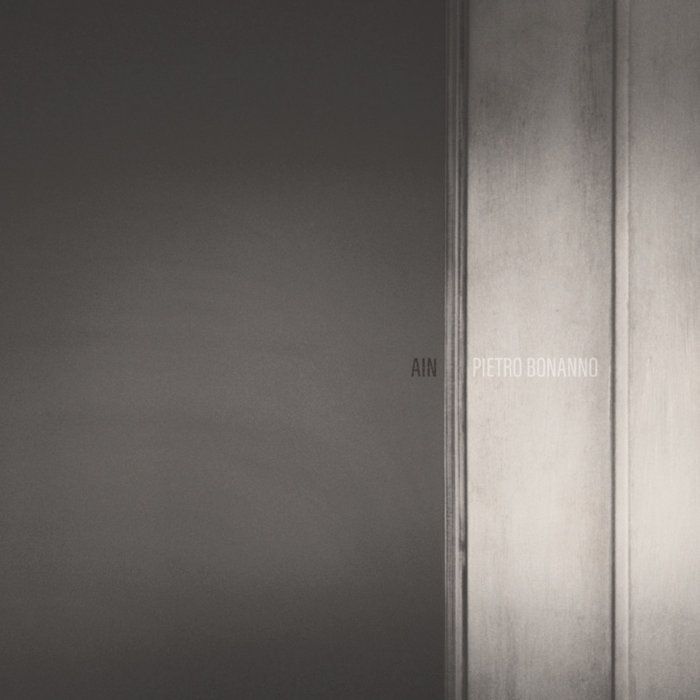 AIN, in Hebrew "Nothing", is by definition a super-concept; an originating no-dimension in which every substance dissolves but from which every existence, at different levels, depends - since we are born out of nothing and return from nothing.
The 4 compositions develop this theme through 4 veils that scratch the nothingness: silence, rarefaction, decay and exploration of inaudible sounds.

Epistomizo, in Greek "reduce to silence", is the last track in chronological order - composed during the quarantine of COVID-19. In this work, using the LOM Uši Pro, I wanted to investigate the galaxy of micro-sounds present in a meditation stool, used as an odd musical instrument in which the touch of the surfaces, inaudible, is intercepted only by the microphones. If there is a dualism between gestural and non-gestural music, there is also a third way: a gestural music audible on condition; a sort of mimic alphabet that only those who know the code can understand.
The composition is divided into three parts: The first is the access to the paradox. The second is the surprise. The third is the dream. In the first, the materials are left almost in their purity, trying to eliminate any unrelated element as the sculptor does with marble. In the second part, thanks to SPEAR software, the unrelated matter was so much that only an high-pitched bell is left, a few suspended frequencies in a field. The third part, “reduce to silence”, is the voice speaking without voice. The granular becomes chord, what we encountered at the beginning appears and disappears leaving a harmonious background from which a fat sound starts to resonate, in a non-language generated by the stool itself which is thus at the same time stool and meditation. Only the one who meditates has disappeared.

Ageratos, a Gnostic Aeon whose meaning is "Never Old", in myth is the companion of Henosis, "Union". Ageratos is a study of how rarefaction affects time. Here the chords generated by a Roland System-1 degrade in pitch and cross the Aeon Henosis, represented by the intermittent buzzing pad that interrupts the flow of degradation. Gradually the two sound objects rarefy together. The duration thus becomes the main parameter of this composition and, at the same time, mythologically, what brings together the syzygía Ageratos-Henosis, the “Never Old” and the “Union”.

Koronous, one of the hypothetical names of Kronos, Saturn, is a composition that, like Epistomizo, uses the galaxy of micro-sounds that can be intercepted using the LOM Uši Pros. The piece is the union of balls, coins, paper, mouth noises, plastic, rustling on a work table, brought to the foreground by a molecular rhythm, time as cyclicity.
The repetitions of each sound object create hypnotic circuits in which everything is found and lost. The form is descriptive-procedural - each event makes its advent and it is lost in the flow of repetition until it touches, meets and overcomes the silence. Michael Norris' plugins, as far as granular synthesis (even if used here incorrectly) and delays, helped me in creating the rhythmic material. In Koronous there is also the realistic landscape of the place where the objects were sampled, a landscape that I wanted to insert several times to underline the two listening levels.

Tanafas in Arabic means breath. It is the first composition to have been created in order of time and was acusmatically transmitted on November 27, 2018 for the concert season of the Teatro Massimo in Palermo. The sound objects were recorded in 2016 in Japan, in the Tendai temple of Himeji, during the New Year rite. The recitation of the mantra and the sound of the bell were recorded with a Zoom H4n inside and outside the temple at 02.00 am. In particular, the bell was recorded in the woods, going towards the cableway. The breath is that of the Mantra singers and at the same time that of the listener. Incredibly the two breaths work in opposite ways. The speed of singing, in this case, implies fast breathing, while the speed of listening implies slow and deep breathing.

Bandcamp Daily  your guide to the world of Bandcamp